OmniMyth: Fables is a character-driven fantasy roleplaying game where the adventure is secondary to the friends you make along the way. You'll wield unique and powerful weapons and abilities to fight back the forces of your Guide's imagination. If you feel so inclined, traipse through the scenic town of Tana's Dell and discover the sordid alchemical secrets it contains between the trees.

1. Subvert the hero's journey: It's great for stories, but makes for a poor group play experience.

2. Play the character that you want: Classes can be restrictive. This is my take on a "classless" RPG system, which instead allows you to create your own abilities and have some flexibility in how you change them as you level.

3. Combat should be interesting and fast paced: No more slog-boring, phone-checking combat sessions. OmniMyth has fast-paced, brutal combat where the tables can be turned at the drop of the hat.

4. Death should be interesting: Death is boring in an RPG. Throwing away your old character and rolling a new one can feel heartbreaking. So, how about playing as a ghost instead? Or going on a quest to come back to life? Death in OmniMyth can be the beginning of a new play arc.

OmniMyth: Fables is full of beautiful illustrations and tips for a successful campaign. In addition, you'll find a blank character sheet for your use. Form-fillable character sheets are available at OmniMyth.net 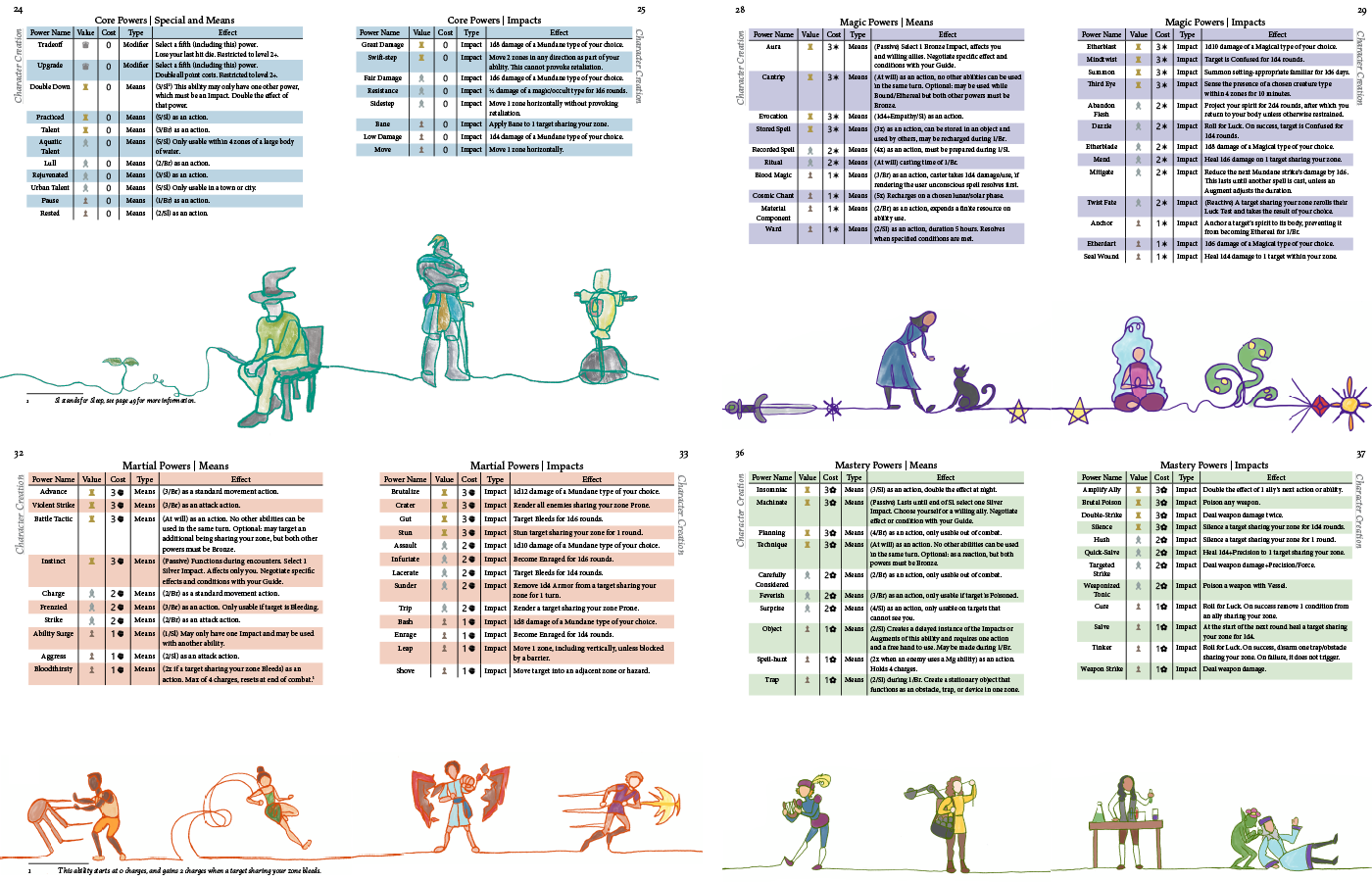 The ability creation system allows you to create more than 500,000 unique spells, techniques, and abilities to accurately represent your character's skills, personality, and goals.

Also featured at OmniMyth.net is a random character generator, so that you can jump into play with a unique character at a moments' notice.

If you purchase the game at $12 or more I will add additional community copies. These copies are freely available to those who are otherwise unable to purchase the game. The $12 copy of the game comes with a small hand-written thank you message from the author on the "inner cover" of the PDF.

In order to download this tabletop RPG you must purchase it at or above the minimum price of $8 USD. You will get access to the following files:

Support this tabletop RPG at or above a special price point to receive something exclusive.

Always wanted to get your own copy of OmniMyth: Fables, but you lack the budget?

No problem! Now, you can get access to free community copies of OmniMyth any time someone generous buys a copy at $12 or more.

Do you want to help spread OmniMyth to others?

You can do that! Every purchase at $12 puts another copy of OmniMyth: Fables into the community copy pool, the available copies will be updated once daily.

I've just discovered I own this due to the BLM bundle. It's really cool; I might buy it again.

I'm really glad to hear that! I hope you get a lot of fun out of it. If you end up playing I'd love to hear about your experience in the discord. We're in layout on the books spiritual successor now!

Where may I find this discord? Discord's search for public servers yielded no results.

There should also be a link at the omnimyth.press website. :)

Omnimyth Fables is a medium-crunch fantasy adventure game with a deeply creative engine and some cool mechanical flourishes that should interest anyone who wants to play something that's technically in the same family as DnD, but very, very different.

The PDF is 72 pages, with very easy to read layout and some solid art, and the game is designed to be easy to switch to other genres and settings---so long as it stays an adventure game.

Mechanically, though, is where Omnimyth gets interesting.

Let's take the EXP system for example. You don't accumulate universal points from killing creatures and achieving objectives. You have three kinds of exp currencies, one for plot-related accomplishments, one for side-objectives, and one for roleplaying and character advancement. In a typical game, you need a point in each to level, but your GM can change that, making it so that, say, you only level through side objectives and you need to complete two to level up. Or maybe you level mostly through advancing the plot, but you also need at least one point of RP.

This approach, taking something familiar and reworking it from the basics, is how Omnimyth approaches most design problems.

You don't have any dead, unhelpful stats. There's really only one skillset that doesn't *quite* feel as effective as the others (presence, convince, bluff, and entertain feel like they overlap a bit too much.) There's a meta-currency, Serendipity Points, that you can use to (sometimes) resist the tyranny of the RNG. Character abilities aren't class-driven; you get a pool of points to custom-build your own new powers each level.

Combat is grid-map-based though, and skill checks fall back on the d20, so Omnimyth's experience isn't going to feel unfamiliar to someone who's played DnD, but it feels like a solid step in a new and different direction.

Overall, I would recommend this to anyone who's interested in modding or making your own content, as well as to D20 fans who want a familiar engine to build their custom campaign or setting. It's *also* good if your whole group likes homebrew, because of how tolerant it is of letting everyone brew as they go.

-Page 10, Trait Limits And Growth, "your traits are limited by the level of your character" I couldn't figure this one out. Does it mean you can't have a trait that's higher than your current level? Or is this just saying that you get more trait points as you level?

-Page 16, Serendipity, "ability points" You might want to add a pointer here directing to the Ability Points section, since we've only read about Trait Points up to this point.

Thank you so much for the review and read-through. Regarding trait points, your second reading is correct but it's unclear due to an error on my part, in one of the initial tests of the system traits were limited by level and I re-interpreted that line when I was doing edits instead of removing it entirely, the result is unclear.

I'm working on a full re-write of the book that re-structures the way that a lot of the information is presented, hopefully that will resolve the issue with the rate at which the concepts of ability points/serendipity points are introduced.

If you ever have any questions or want to give some input on the development of the update feel free to jump into our discord!

Quick question, I'm going to take another look through the guide just incase I missed it but do enraged and bleed do anything besides modify other attacks through means and augments?

Bleeding is applied as a condition to any target hit by an ability that applies bleeding, once applied every time the target takes a turn they take 1d4 damage, reducing the number of bleed stacks by 1.

The only way a player can cause bleeding is if they have an ability made with the impacts Gut or Lacerate (or if you make up any of your own!)

Enraged is a positive condition that is also applied as part of an ability, and reduces damage taken for its duration.

Rules as written the only way to have either effect on the table would be to make it part of a character's ability through Martial Impacts, however you could always tie it to a magic or masterwork weapon of some sort, or a special piece of armor if you felt it would serve your game better.

Hope this helps! If you're still confused feel free to jump into the discord and we can talk about it.

Thanks will definitely check out the discord

Reply
Jinx the Goblin2 years ago(+1)

This should be in the physical games section

You're so right! I didn't even realize there WAS a physical games section. Fixed. Thank you for your comment! 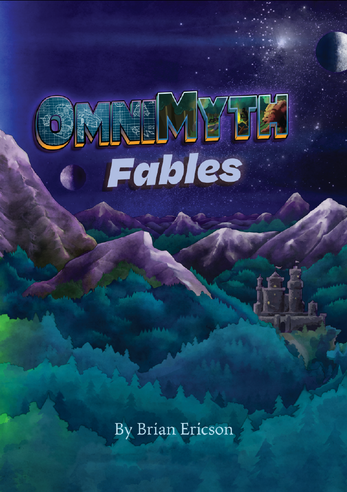 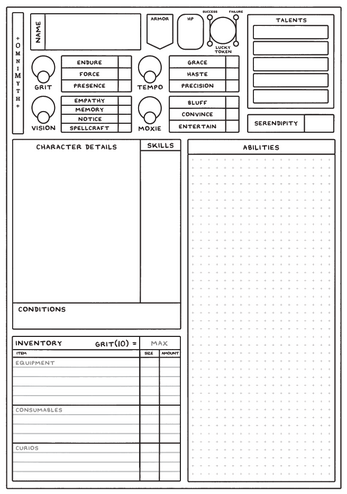 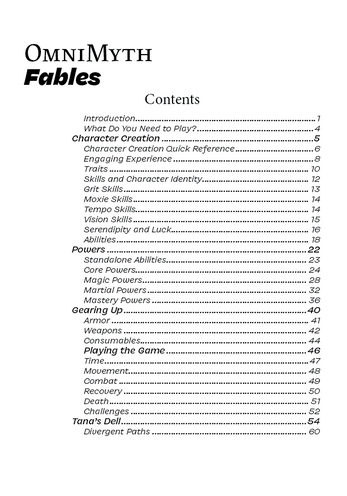 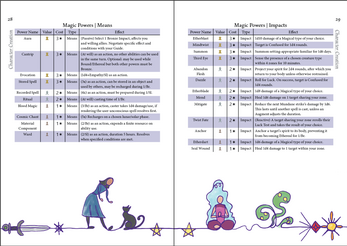 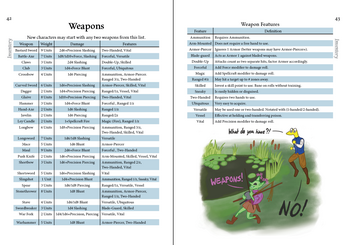